Imagine walking into a room at night, turning out all the lights and closing the shades. Yet an eerie glow comes from the walls, ceiling, and floor. The faint light is barely enough to see your hands before your face, but it persists.

Sounds like a scene out of “Ghost Hunters?” No, for astronomers this is the real deal. But looking for something that’s close to nothing is not easy. Astronomers searched through 200,000 archival images from Hubble Space Telescope and made tens of thousands of measurements on these images to look for any residual background glow in the sky. Like turning out the lights in a room, they subtracted the light from stars, galaxies, planets and the zodiacal light. Surprisingly, a ghostly, feeble glow was left over. It’s equivalent to the steady light of ten fireflies spread across the entire sky. 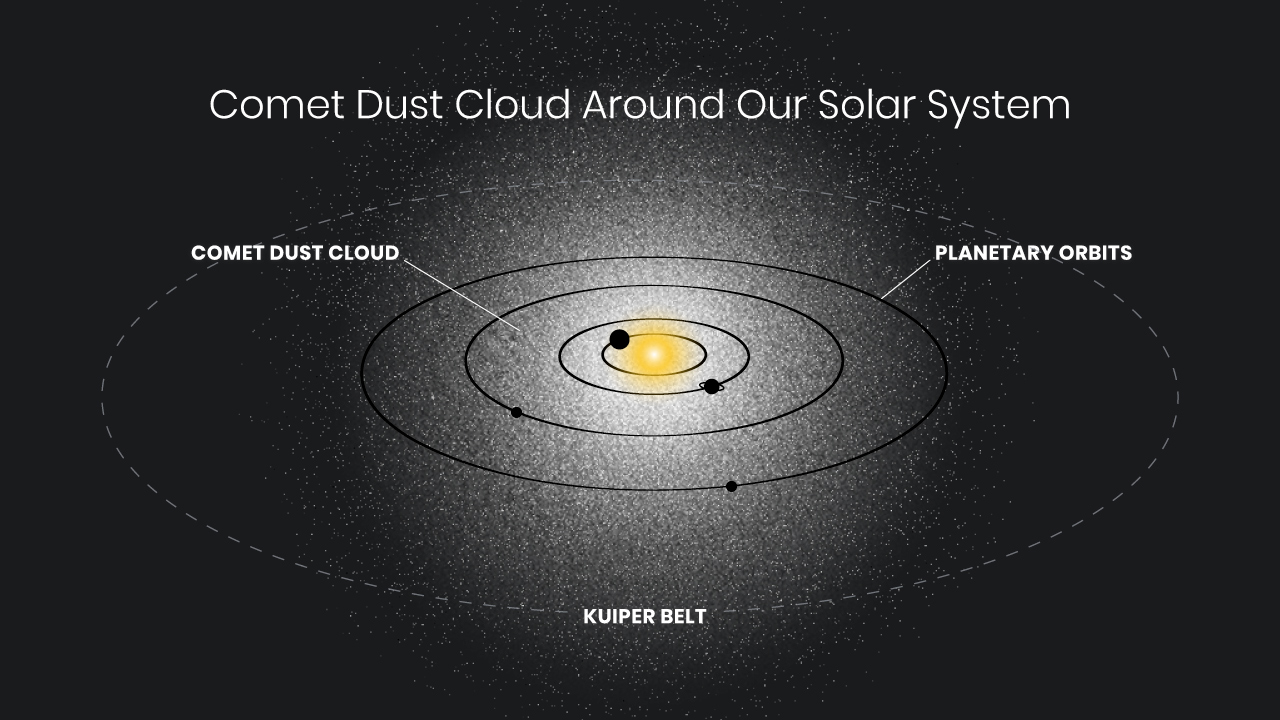 Where’s that coming from?

One possible explanation is that a shell of dust envelops our solar system all the way out to Pluto, and is reflecting sunlight. Seeing airborne dust caught in sunbeams is no surprise when cleaning the house. But this must have a more exotic origin. Because the glow is so smoothy distributed, the likely source is innumerable comets – free-flying dusty snowballs of ice. They fall in toward the Sun from all different directions, spewing out an exhaust of dust as the ices sublimate due to heat from the Sun. If real, this would be a newly discovered architectural element of the solar system. It has remained invisible until very imaginative and curious astronomers, and the power of Hubble, came along. 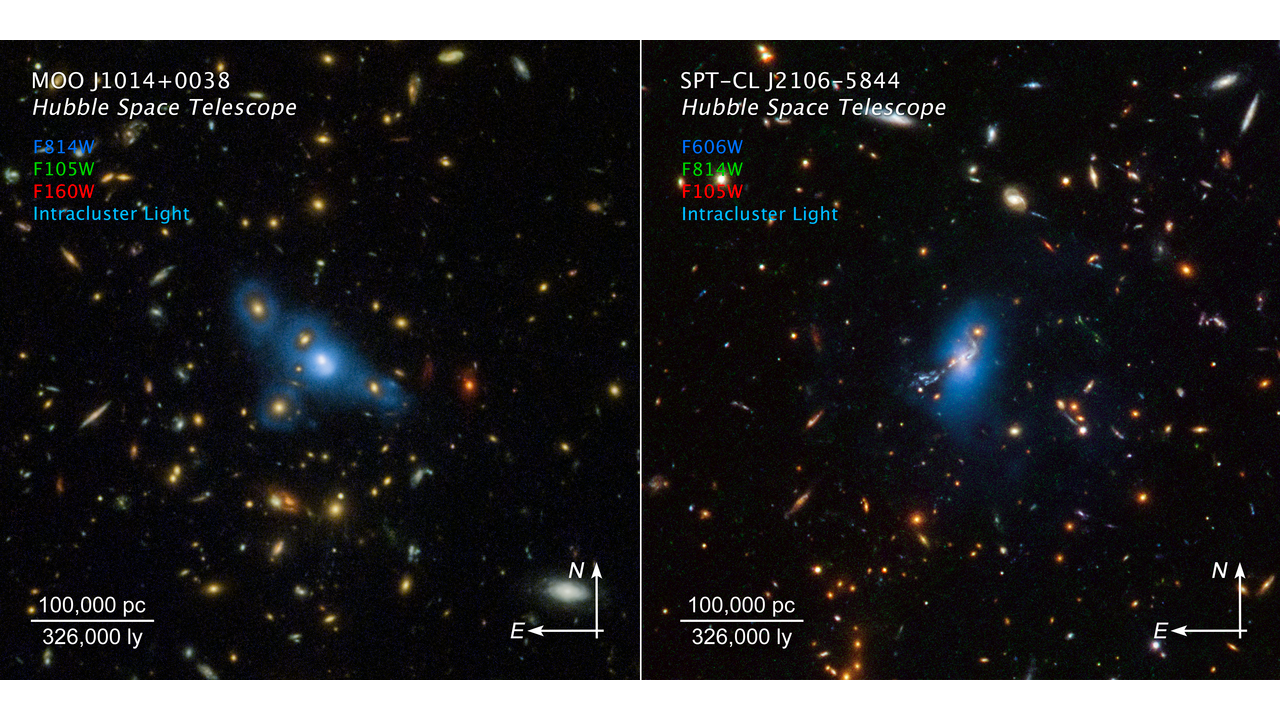 Aside from a tapestry of glittering stars, and the glow of the waxing and waning Moon, the nighttime sky looks inky black to the casual observer. But how dark is dark?

To find out, astronomers decided to sort through 200,000 images from NASA’s Hubble Space Telescope and made tens of thousands of measurements on these images to look for any residual background glow in the sky, in an ambitious project called SKYSURF. This would be any leftover light after subtracting the glow from planets, stars, galaxies, and from dust in the plane of our solar system (called zodiacal light).

When researchers completed this inventory, they found an exceedingly tiny excess of light, equivalent to the steady glow of 10 fireflies spread across the entire sky. That’s like turning out all the lights in a shuttered room and still finding an eerie glow coming from the walls, ceiling, and floor.

The researchers say that one possible explanation for this residual glow is that our inner solar system contains a tenuous sphere of dust from comets that are falling into the solar system from all directions, and that the glow is sunlight reflecting off this dust. If real, this dust shell could be a new addition to the known architecture of the solar system.

This idea is bolstered by the fact that in 2021 another team of astronomers used data from NASA’s New Horizons spacecraft to also measure the sky background. New Horizons flew by Pluto in 2015, and a small Kuiper belt object in 2018, and is now heading into interstellar space. The New Horizons measurements were done at a distance of 4 billion to 5 billion miles from the Sun. This is well outside the realm of the planets and asteroids where there is no contamination from interplanetary dust.

New Horizons detected something a bit fainter that is apparently from a more distant source than Hubble detected. The source of the background light seen by New Horizons also remains unexplained. There are numerous theories ranging from the decay of dark matter to a huge unseen population of remote galaxies.

“If our analysis is correct there’s another dust component between us and the distance where New Horizons made measurements. That means this is some kind of extra light coming from inside our solar system,” said Tim Carleton, of Arizona State University (ASU).

“Because our measurement of residual light is higher than New Horizons we think it is a local phenomenon that is not from far outside the solar system. It may be a new element to the contents of the solar system that has been hypothesized but not quantitatively measured until now,” said Carleton.

Hubble veteran astronomer Rogier Windhorst, also of ASU, first got the idea to assemble Hubble data to go looking for any “ghost light.” “More than 95% of the photons in the images from Hubble’s archive come from distances less than 3 billion miles from Earth. Since Hubble’s very early days, most Hubble users have discarded these sky-photons, as they are interested in the faint discrete objects in Hubble’s images such as stars and galaxies,” said Windhorst. “But these sky-photons contain important information which can be extracted thanks to Hubble’s unique ability to measure faint brightness levels to high precision over its three decades of lifetime.”

A number of graduate and undergraduate students contributed to project SKYSURF, including Rosalia O’Brien, Delondrae Carter and Darby Kramer at ASU, Scott Tompkins at the University of Western Australia, Sarah Caddy at Macquarie University in Australia, and many others.

Credits of this release: NASA, ESA, STScI via hubblesite.org

A Day in the Life of a Science, Technology, and Weapons Analyst | CIA

This is part of our series profiling Agency officers in various positions throughout the Agency. We ta...

Donors must double investments to stamp out hunger | FAO News